In Mid July, I noticed a few of the 1st year plants had japanese beetles crawling on them.
I had heard of Japanese beetle traps.  They are very effective according to our farm neighbors. 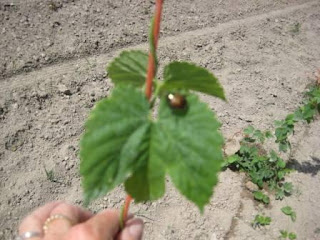 I ventured off to the local box stores to buy a few of these traps. It turns out that lots of folks are experiencing Japanese beetle problems this summer.  The traps were in short supply.  We purchased six of them and hung them at the west end of our plot. 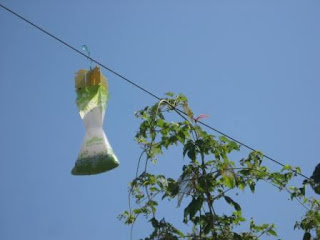 We also hung one way up on the top of the trellis for the 2nd year plants.  Even though there wasn't huge evidence of Japanese beetle presence here we thought we should protect the bines which were just beginning to flower. 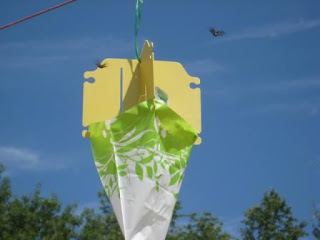 The beetles are attracted to the traps by the scent of a solid disc which is lodged above the bag.  The results are immediate.  The bugs fly into the bag without hesitation. 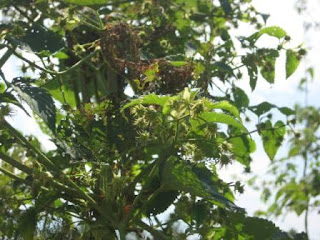 The following weekend we arrived at the hops yard to see this:  Our hops bines had been inhabited by thousands of Japanese Beetles.  The bags that we had hung were overflowing with rotten smelling dead bugs.  There were beetles all over our 2nd year plants. 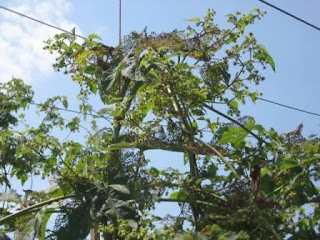 The leaves were destroyed.  Japanese beetles eat the flesh of the leaves and a "lacy" skeleton of a leaf is all that remains. 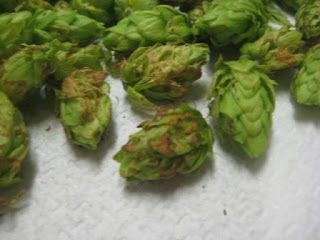 The beetles also ate many of our Northern Brewer hops cones.  These will have to be discarded.  We lost over half of our early harvest varieties to Japanese beetles damage.
Frustrated, angry and disappointed, we sat down under our 2nd year hops bines to have a cold drink and rest in the shade.  As we sat there we noticed that the beetles seemed to be flocking towards the trap from the nearby swamp.  Could we be causing a greater problem by locating the trap directly next to our prized plants?  What if we placed the trap 50 feet away at the edge of the swamp?
It turns out that by using these traps we caused greater problems than if we had not used them at all.  These traps need to be placed very strategically away from the plants you are trying to protect.
Once we moved the traps away from the plants the bug problem on the hops subsided.  We were able to salvage the remainder of our hops from more beetle damage.  Even thought the Nugget variety had considerable damage to the leaves, the flowers went on to produce cones free of bug damage.
We learned a valuable lesson the hard way.  One of many to come I'm afraid.
Growing crops of any kind is not easy.
Posted by Amy Haselhuhn at 10:23 PM No comments: